Ideology is a received and conditioned framework for making sense of social reality. When we observe social facts, there are certain things which we think it makes sense to say about them, certain stories about them which we find to be intelligible, coherent and compelling. In the case of a hypothetically apolitical being, the “isolated, rational reflector” of classical philosophical thought experiments, this sense making process would occur without any reference to what other people think or believe. Or, if there were reference, it would be conscious and weighed with the other data of experience, not assumed and employed without the reflector’s knowledge. In the real world, where we learn how to interpret this real world in the context of a set of received assumptions, stories, notions, ideas, ideals, norms, acceptable beliefs, ready made interpretations and analyses; along with a healthy dose of carrot-stickery and the anticipated responses of other people to our thoughts and actions, this occurs as part of an external cultural and discursive process which becomes a major contributor to our internal reasoning process, even to the extent of overwhelming it. This major external contributor can be referred to as ideology. Ideology serves, primarily but not exclusively, to allow for the functioning of political communities in a predictable way. The fact that in every society, political actors (here political actor is treated as synonymous with homo sapien) come to the proverbial table with a shared framework and conditioning for making sense of both objective material facts and social ones, allows for significant continuity over time and helps ensure that those aspects of social life which are most essential to maintaining continuity are preserved. (And, in every society which has ever existed, those most essential aspects tend to be the ones which maintain existing social stratifications across the vistas of time and change.)

We might then relate this to the following thesis: Everything is political. Consider the proverbial housewife, (A thankfully almost obsolete social construct) who cooks what her husband wants for dinner while he is at work. In all likelihood, at no point was the question of whether or not the wife should go out and work while the husband stays home and cooks even considered, it likely wasn’t even a question which it would occur to them needed to be asked. Perhaps the wife far outshines her husband in intellectual brilliance in ways which would bring home much more money for the household if she could but monetize them, perhaps the husband is the more naturally nurturing of the two and also the better cook. Rational reflection, in this case, when conducted by the hypothetical lonely rational reflector mentioned above, might lead to an order which is precisely the reverse of what is actually the case. Since, for the purpose of my thought experiment, this was not even considered, it is not simply the case that the pair determined that given the way society works, the husband would be able to demand a higher wage for his work: The determining factor would seem to be, that, from early childhood, the boy who would become the man has been given to understand that in the necessary, and therefore best, order of things, the way that they are doing things are the way things must done. (That the wife would have received a feminized version of this conditioning goes without saying). 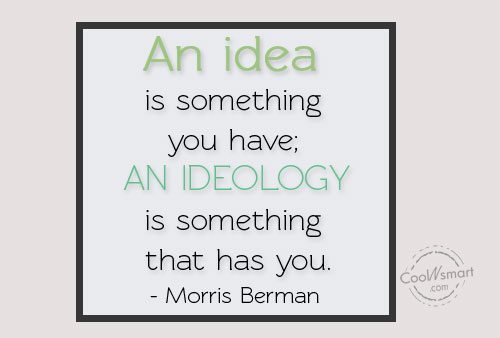 See: “Of course” as in: “Of course the man earns the money while the wife works in the kitchen,” This notion is considered to be beyond the realm of reflection because it is “natural.” The social scientist says, no, all social facts are contingent and in principle should be reflected upon. This impasse, on the side of those who are in the clutches of ideology is iconically expressed by the exasperated exclamation: “That’s just the way things are!!!” How things are is the product of millions of decisions made by people who believe themselves to be rational actors in the sense of the classical philosophical thought experiment, this is in addition to the decisions of political elites, though even these decisions must be made with at least an implicit understanding, if not in all cases outright acceptance, of the same ideological framework used by the masses, provided the elite want to remain elite. These decisions are not simply the ones which we classically recognize as political, as my previous examples show. It is easy to recognize ideology in the decision to pass a law proclaiming that a man cannot beat his wife with a stick wider than his thumb (the rule of thumb); perhaps not so easy to recognize it in the individual man choosing to beat his wife. But, because one believes one need not rationally reflect upon the man’s need and entitlement to beat “his” wife, and, even if one did, this “rational reflection” would be conditioned by the external discursive factors which gave rise to the “rule of thumb,” we can then say that what appears to be solely an individual decision is conditioned by the external influence of something which only came into being by the action of humans living together in organized communities. It is, therefore, political.

And because this conditioning is always functioning, and must almost always govern the ways we interact with each other, we can say that every interpersonal decision we make is also political. Even when we choose to transgress the prevailing ideology, that we are aware of doing so conditions this transgression, it is not done thoughtlessly or blithely as it might be if we were lonely, rational reflectors. In the opposite direction, we see that this external influence as it impacts the rational thought of the individuals in a community, is necessary for communities to function efficiently (if that is defined as the maximal use of the resources and manpower of the community with minimal discourse and reflection or competing priorities) and with continuity. Put simply, insofar as the options which occur to us in our individual decision making are conditioned by a way of thinking which arises out of and reinforces collective life, namely ideology, this allows us to begin to say that all social facts and realities are political.

Thanks for reading! (If you want to see more of this kind of work and help me build a new media company please become a regular patron ) at: https://www.patreon.com/thenegrosubversive

Please refer speaking and interview requests to: vicintel21@gmail.com with the subject line: Speaking engagement or interview, as appropriate.

Published by The Negro Subversive

View all posts by The Negro Subversive

One thought on “Pending thoughts: A note on ideology”